From the dreams of early South Florida settlers more than 100 years ago, what is now known as Port Everglades first emerged as a means for local farmers to ship their produce. Visionaries of the late 1800s and early 1900s sowed the seeds for what would some day develop into one of the nation's most vital centers of trade and tourism.

Efforts for port development focused around a shallow lake that was separated from the Atlantic Ocean by a low sand ridge. This body of water, known as Lake Mabel or Bay Mabel, was soon called Bay Mabel Harbor. In 1911, the same year of Fort Lauderdale's official incorporation with William H. Marshall as its first mayor, members of the Florida Board of Trade passed a resolution calling for a deepwater port so farmers could ship produce to the north and west.

In 1913, Marshall and Frank Stranahan (who had arrived in 1893 to operate a ferry service and later added a camp and trading post on the banks of the New River) formed the Fort Lauderdale Harbor Co., which eventually opened the New River to the sea for small boats by digging out the Lake Mabel Cut. And in the late 1910s, King conducted a survey for the Florida East Coast Railway (FEC) indicating that Lake Mabel was an ideal site for a rail and harbor operation to enhance trade with Cuba.

It was the founder and major developer of the City of Hollywood, Joseph Wesley Young, who, in the 1920s, played the most integral role in the ultimate development of a deep harbor at Lake Mabel. On Christmas Eve of 1924, Young bought 1,440 acres of land adjacent to the lake with a $2.075 million mortgage and he created the Hollywood Harbor Development Co. At this time, Hollywood was just coming into existence, Fort Lauderdale had fewer than 3,000 residents and all of Broward County had a population less than 30,000, but Young was convinced a deep harbor with ready ocean access would promote the area's growth and prosperity.

In 1925, Young began harbor development, at one point having 35 lumberjacks brought from Vermont to clear a mangrove jungle. By the following year, with the nation in economic crisis, Young, who had become Hollywood's mayor, sought the support of Hollywood and Fort Lauderdale voters in harbor bond referenda. The sale of $2 million in improvement bonds was overwhelmingly approved in each city, with voters celebrating with a band-led, torch-lit procession to Young's home.

A major hurricane struck South FloridaSept. 18, 1926, killing 243 people and causing damage (in today's dollars) of more than $1.5 billion. This slowed progress on the port and, combined with the Florida real estate crash and hard times into which the nation's economy was sinking, led to Young's departure from the project. By 1927, the harbor became a project of its financiers and a special act of the Florida Legislature established the Broward County Port Authority.

On Feb. 22, 1928, with schools and businesses closed, some 85 percent of Broward's residents gathered for a harbor dedication event promoted as the "Wedding of the Waters." President Calvin Coolidge was to press a button at the White House detonating explosives to remove a rock barrier separating the harbor area from the ocean -- but when (and if) he pressed the button, nothing happened. The barrier was removed shortly thereafter and, by the end of 1928, some $100,000 a year of cotton products were passing through the port to Cuba and elsewhere in the Caribbean and Latin America.

Fort Lauderdale's first airport was dedicated in 1929, the same year the port project was officially deemed "completed" and certificates were obtained for construction of a port railroad linking to the FEC. Also in 1929, the port welcomed its first cargo ship (the 385-foot SS Vogtland carrying sheet metal for construction) and first military ship (the USS Antares, carrying personnel of the 2nd Battalion of the Fleet Marine Force).

In the late 1920s and early 1930s, flour, feed, fertilizer, sugar, fruits and vegetables were commodities with the most promise. To promote the seaport's potential regional impact, several women's clubs conducted a name contest in 1930 and the regional moniker of "Port Everglades" was chosen to represent "the gateway to the rich agricultural area embraced in the four million acres at the port's very back door."

Warren T. Eller, manager of the Fort Lauderdale Chamber of Commerce, became the port's first manager in 1932, and he quickly realized one of the port's strongest advantages was its open storage space. Targeting bulk commodities such as petroleum products, lumber, cement and scrap metal, he approached firms requiring large areas to store such materials as well as shippers to carry scrap metal to Japan and other Far East destinations.

In the 1940s, Port Everglades burgeoned as a military operation and by the 1950s it was already a port of call for various around-the-world cruise itineraries. It was at this time that the Fort Lauderdale Rotary Club began a tradition of greeting ships and serving Florida orange juice to passengers -- a tradition that would continue for two decades. In 1958, full harbor tugboat service began, with a new port charter created the following year by the Florida Legislature reflecting the seaport's growth.

The late 1970s brought the opening of Foreign Trade Zone No. 25 and the first rail-mounted container gantry crane (owned by Sea-Land Service), followed by the first port-owned gantry crane in 1981. By the late 1980s, a third gantry crane was in place, the eighth cruise terminal opened and 30 berths were operational.

Development in the 1990s included the 1991 opening of the Greater Fort Lauderdale/Broward County Convention Center at Northport, opening of two parking garages, further cruise and cargo facility enhancements and, in 1994, the transfer of seaport governance from the Port Authority to Broward County government. This decade has seen a further diversification in port activity, with a boom in container traffic making Port Everglades one of the nation's top container ports.

As history has proven that careful planning pays off, the port is again updating its master plan to ensure continued growth and success through the coming years by staying at the cutting edge of technology and service. 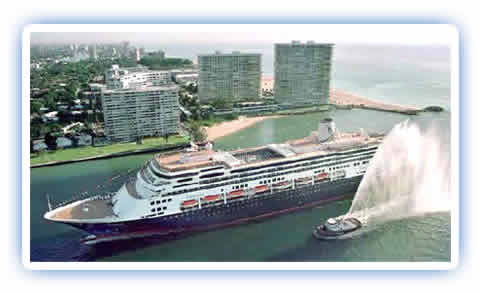